Tobacco Affects Us All

Tobacco kills nearly 60 lakh people each year, out of which more than 50 lakh are users or ex-users and more than 6,00,000 are non-smokers exposed to second-hand smoke. Globally tobacco-attributable causes of death was 10 crore in the 20th century. Unchecked, the toll will rise up to a hundred crore in the 21st century. 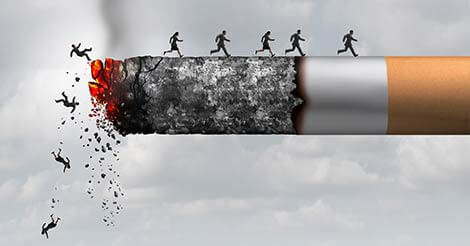 Judgement-Day May Not Be Far

A moment's pleasure may lead to a lifelong regret and a painful death! Yet you always assume that indulging in tobacco use of any form will affect the other person. Again, if you are thinking that you are safe because you did not smoke, think twice. The person next to you - he may be your father, brother, friend or a complete stranger - causes as much harm by smoking in your presence. Studies carried out by leading organisations around the world in the healthcare sector say that globally tobacco-attributable causes of death was 10 crore in the 20th century. Unchecked, the toll will rise up to a hundred crore in the 21st century.

Tobacco kills nearly 60 lakh people each year, out of which more than 50 lakh are users or ex-users and more than 6,00,000 are non-smokers exposed to second-hand smoke. What is more saddening is the fact that in 2004, children accounted for 28% of the deaths attributable to second-hand smoke. And there is more to add to the story. Ecologically tobacco cultivation heavily contributes to deforestation, depletion of soil nutrients and destruction of indigenous flora and fauna. It is believed that meteors were responsible for wiping out entire life species like dinosaurs from the face of the earth ages ago. If stories of the impending Judgment Day are to be believed, we won't need a shooting star - tobacco is enough to make us extinct!

Statistics suggest that globally more than 40% children have at least one smoking parent. Also, unless urgent action is taken, the annual death toll for tobacco-attributable causes could rise from 60 lakh to more than 80 lakh by 2030. Estimates suggest nearly 80% of the world's 100 crore smokers live in developing and under-developed countries. Based on current trends and estimates, the World Health Organisation (WHO) has predicted that India will have the fastest rate of rise in deaths attributable to tobacco in the first two decades of the 21st century. Statistics throughout the world are an overwhelming pointer to the power of ignorance and human stupidity.

Studies reveal that there are more than 4000 chemicals in tobacco smoke, of which 250 are known to be harmful and more than 50 are known to cause cancer. Yet we choose to remain blind and indifferent to the tragic predicament. Thousands of scientific investigations have also confirmed the association of smoking with various other diseases, and have provided additional evidence implicating cigarette smoking as a cause of coronary artery disease, stroke, obstructive airway disease, peripheral vascular disease, pregnancy complications including intra-uterine growth retardation and a variety of neoplasms including cancers of oral cavity, larynx, oesophagus, urinary bladder, kidney, stomach, pancreas, cervix and more recently of haematopoietic system. Incidentally, tobacco is also harmful without being smoked or chewed. Green Tobacco Sickness (GTS), an acute form of nicotine toxicity that results from absorption of nicotine through the skin ails workers engaged in tobacco cultivation.

Stop Before It Stops You

With greater awareness of the dangers posed by the tobacco spread, nations across the world have resolved to fight the war against the tobacco threat by forming campaign strategies and comprehensive plans. Governments are legislating laws prohibiting the use of tobacco and NGOs and other independent organisations are executing awareness campaigns. But in spite of all that, the onus lies with us as individuals to be more conscious of the serious nature of the threat posed by tobacco. The prerogative for preventing an untimely death - whether it concerns us directly or indirectly - through regular checkups and timely remedial measures also rests with us. It is for the future only to tell whether we will remain blind and perish or wake-up and make the right choice. Until then...

It has been proved that many people are losing their lives because of the Tobacco. It leads to various types of health problems. To avoid the diseases, it is recommended to go for a preventive health checkup provided by the Indus Health Plus. You can go for the master health checkup which covers everything in one package. It will help you in identifying the complications and what all measures you need to take to control that. For more information get in touch by filling out the query form.

Need help from expert? How can we get in touch with you.

Need help from expert? How can we get in touch with you.
Share your details