Early detection of cancer is the best way to treat it better. Diagnosing it at the earliest and getting right treatment is the key to good prognosis of lung cancer. 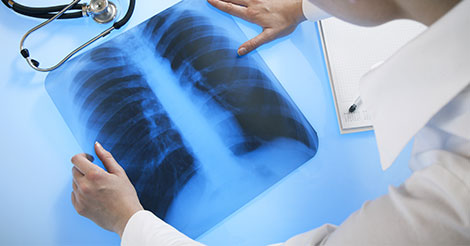 If there seems to be a reason to think that the person may have lung cancer, doctor can order a series of tests to see for cancerous cells in the body and areas around lungs. Following are the lung cancer screening tests,

An X-ray of the lungs may expose an abnormal mass or nodule. A more advanced CT scan test can show small lesions in the lungs that might get missed in an x ray.

If the cough is accompanied with sputum, studying sputum under the microscope may reveal presence of lung cancer cells.

Biopsy or Taking a Tissue Sample -

A sample of abnormal cells taken out from an abnormal lass or nodule is removed in a procedure called a biopsy and sent for testing in a lab.

The specialist doctor chooses a cancer treatment plan based on the overall health, type and stage of the cancer, and preferences of patient. Treatment plan typically include one or more methodologies including surgery, chemotherapy, radiation therapy or targeted drug therapy.

During lung cancer surgery, the surgeon removes the lung cancer and some part of healthy tissue.

a larger portion of lung, but not an entire lobe is removed

Lung cancer surgery may carry the risks of bleeding and infection.

Chemotherapy is using medicines to kill cancer cells. One or more type of drugs may be used through a vein in the arm (intravenously) or taken orally. This is given over a period of weeks or months, with breaks in between so that the patient recovers from the after effects, if there are any.

Chemotherapy is also often used after surgery to kill any remaining cancer cells and sometimes even before surgery to shrink the tumour so that it becomes easier to remove.

Radiation therapy is usage of high-powered energy rays like X-rays, which are strong enough to kill cancer cells. Radiation therapy can be directed straight at the lung cancer from outside the body (external beam radiation) or it can be placed inside the body near the tumour (brachytherapy).

Radiation therapy can also be used after surgery to kill any remaining cancer cells. It may also be used as a first line of treatment in lung that can't be removed by a surgery.

Targeted drug therapies are newer form of cancer treatments that helps in blocking the growth and spread of cancer by preventing cancereous cells from dividing or destroying them directly.

It is important to pay keen attention towards the signs and symptoms that your body communicates to you. These symptoms could help in the early diagnosis of disease. In lung cancer cases, early detection of the disease is the key to treat it better and fast. Indus Health Plus offers complete health checkup packages and offers a detailed analysis of your body and health status. Such examinations are necessary to detect life-threatening diseases like lung cancer in its early stages. To contact us, please fill the form and we will connect with you.